There are many incidents concerning the history of black firefighters, particularly in the City of Chicago, which are most likely mirrored in every major city throughout the United States.  Nationally, Black men were not hired as firefighters in America until well after World War II; and this has stymied Blacks’ ability to get employment and promotions in the fire service, in general.  Black men, such as Thomas J. Martin, the inventor of the fire extinguisher in 1872; Garrett A. Morgan, the inventor of the gas mask in 1914; and Engine 21’s invention of the firehouse sliding pole discredit these negative stereotypes of Black men and Black firefighters.

Many, if not all, of Engine 21’s Black members were ex-slaves and Civil War Veterans. Foreman David Kenyon was a Captain, the highest rank served in the war and he was said to have led a Black regiment of men, making him an ideal candidate to lead this brave group of men. Seven years prior to establishing Engine 21, the Civil War ended, banning Slavery; and thereby granting equal rights, voting rights and citizenship to Blacks.

One major fact that most people are unaware of is that the concept and use of the fire house sliding pole was invented and made popular, in Chicago and nationally, by Foreman David Kenyon and members of Engine 21. Kenyon never received a patent for his invention, but Documentation verifies where this concept was originated and first conceived. The concept was ingenious, but the use of wood was discontinued because of splinters and other maintenance problems, so three years later, in 1880 Boston patented the brass pole, taking this concept to the next level.

Engine 21 led Chicago’s fire companies in fire runs, fire work time and total runs, and stimulated competition among fire companies.  From 1872-1927, Engine 21 participated in most, if not all, major fires that occurred in Chicago’s Downtown area, namely, the Iroquois Theater fire December 30, 1903 and many other fires in Printers Row.

Black Heroes of Fire: The History of the First African-American Fire Company in Chicago -Fire Engine Company 21 is dedicated to those unselfish courageous noble Firefighters both black and white; slave and free; who paid the ultimate price while serving to protect life and property. 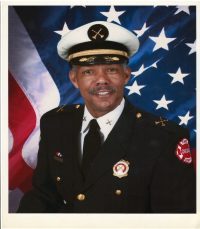 According to Author Dekalb Walcott, Jr  “It is my desire to clear up any misconceptions of Engine 21 being the first organized paid black fire company in the United States; moreover, to establish that David B. Kenyon (1836-1884) and the members of Engine 21 created and made popular the concept of the sliding pole in the Fire Service.

Retired Battalion Chief Dekalb E. Walcott Jr. served 31 years as a Chicago firefighter starting his career in November 1978.Throughout his career Dekalb served as Firefighter to Battalion Chief along with serving in fire prevention and public education. He has received numerous awards for community service, served as Chairman for Black Firefighters day and was responsible for helping Chicago establish a smoke detector and carbon monoxide ordinance in the mid 1980’s. Dekalb has received numerous awards for community service. He has served on the executive board of the African American Firefighters and Paramedic League of Chicago as historian, corresponding secretary, sergeant at arms, vice president and President. Dekalb sponsored a 100-photo pictorial display during Black History month in February of 1984 honoring Chicago’s unsung Black Heroes of Fire, which started his career as Chicago’s Black Firefighter historian.  BLACK HEROES OF FIRE: The History of the First African-American Fire Company in Chicago -Fire Engine Company 21 is Dekalb Walcott’s first published book.

THE HISTORY OF THE FIRST AFRICAN-AMERICAN

OR ORDER PAPERBACK BOOKS ONLNE AT:

Email your Purchase Orders to:

Vincent Johnson
5.0 out of 5 stars Value

Reviewed in the United States on February 21, 2020

Format: PaperbackVerified Purchase
If you are a firefighter and love history about the fire services, this is the book for you.
Toni L. Parks Oats
5.0 out of 5 stars original history of Black firefighters in Chicago

Reviewed in the United States on December 30, 2019

Format: PaperbackVerified Purchase
Used for family history. My father is named in the book.
NDyia Mahon-Godfrey
5.0 out of 5 stars Engine 21

Format: Paperback
Quick read, shows the passion behind the hurdles that one endures.